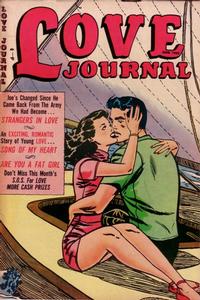 Strangers in Love (Table of Contents: 1)

Song of My Heart (Table of Contents: 2)

Genre
romance
Characters
Brad Croton; Delia Porter; Mr. Miller; Bob; Mr. Porter; Mr. Croton
Synopsis
Brad and Delia are attracted but he’s the son of the town’s richest man and in a different social class than her family. Brad convinces Delia this doesn’t matter, but his friends think she’s a gold-digger. Brad’s father says marrying Delia will ruin his son’s future, so she pretends to only care about Brad’s money and they break up. However, Brad refuses to work in his father’s company: he and Delia reconcile and Brad goes into the music business, his true passion.

Jottings from a Love Journal (Table of Contents: 3)

First Line of Dialogue or Text
The boy I love just broke our engagement...
Genre
romance
Characters
Mark Ford; Eleanor M.; Danny
Synopsis
Danny and Eleanor fall in love but he constantly criticizes the fact that she’s “too plump” and is too “spoiled and self indulgent” to stick to a diet. He dumps her, and she goes to Mark Ford “noted analyst of love problems” for advice. Mark Ford noted analyst of love problems resolves (or asks readers to send the best letters about) Eleanor M.'s problem.

The odd thing about this story is that Eleanor is described as "plump" and yet is not drawn as overweight at all.

Genre
romance
Characters
Carol; Ben Moulton; Tommy
Synopsis
Office worker Carol is relaxing in the park when she encounters bratty child Tommy. Tommy’s uncle Ben makes excuses for him but the boy continues to irritate Carol. They meet again the next day and the next, and Carol finds herself attracted to Ben but repulsed by the rude and obnoxious young boy. Ben and Carol fall in love and Ben admits he “borrowed” Tommy from a neighbor so he’d have an excuse to talk to Carol.