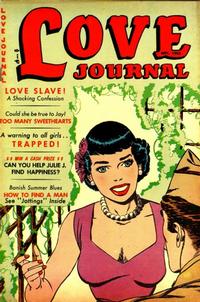 Too Many Sweethearts! (Table of Contents: 1)

Genre
romance
Characters
Nora; Corporal Jay Barnes; Lt. Tod Winters; Sandra
Synopsis
Nora is a waitress in a soda shoppe. Soldier Jay says he’ll marry her when he finishes his military service and she agrees to wait, but when he’s transferred to another base, she is lonely. Nora agrees to date officer Tod, but only as a friend. One night Tod kisses her and they're seen by one of Jay's friends. Nora learns Tod is a womanizer and stops going out with him. Jay comes home on leave and learns Nora has been unfaithful, but he forgives her and she vows to wait for him “faithfully” this time.

Genre
romance
Characters
Carla; David; Ray Moore
Synopsis
Carla goes to a resort hotel on vacation. Boxer Ray Moore is training nearby, and she becomes infatuated with him, although she’s engaged to David. When David comes to visit, Carla confesses all. David and Carla overhear Ray boasting about winning a bet that he could seduce Carla. David punches Ray and leaves with Carla, who realises she nearly made a terrible mistake.
Reprints

How to Find a Man (Table of Contents: 3)

First Line of Dialogue or Text
My fiance, Arthur B., wants me to marry him right away...
Genre
romance
Characters
Mark Ford; Julie; Arthur B.
Synopsis
Julie falls in love with Arthur and they plan to marry, but she comes from a devout Catholic family and his parents are devout Lutherans. Arthur’s father says he won’t be welcome in their home if he marries outside their faith. Julie’s parents aren’t opposed to the match, but warn Arthur that he may eventually blame Julie for his separation from his parents. Julie asks Mark Ford for advice and he puts the question to the readers of “Love Journal.”

Genre
romance
Characters
Gerald Tyne; Edith Corman; Margo; Ted Bronson; Dickerson
Synopsis
Edith is hired by Gerald as a secretary/bookkeeper for his modeling agency. She falls in love with him, and he asks to put the business in her name for business reasons. However, when the agency is exposed as a front for a prostitution ring, Gerry blames Edith for everything. He asks her to take the fall since she’ll get a lighter sentence. Assistant District Attorney Ted believes Edith and clears her name. Edith and Ted also fall in love.