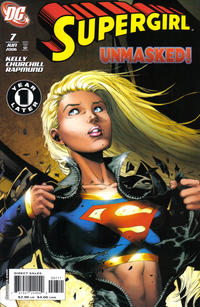 Genre
superhero
Characters
Saturn Queen; Supergirl [Kara Zor-El]; Power Girl; Ultraman [as Kal-El]; Chezzt; Praisesingers; Zor-El (flashback, cameo); Clark Kent (flashback, cameo); rebel leader Basqatin; Mamoth (cameo)
Synopsis
"Kal-El" recognizes Flamebird's tattoo and tracks down who was tattooed. Monitors interrupt Nightwing and Flamebird's meeting with the rebel leader and "Kal-El" threatens to kill people until the pair surrenders. He starts, but "Nightwing" and "Flamebird" rescue a mother and child. The child is a bomb that explodes, injuring the pair. The real Nightwing and Flamebird arrive and Flamebird starts beating "Kal-El", as instructed by a flashback of her father. Nightwing is unable to stop her. Flamebird hears a voice from from "Kal-El's" mother, Saturn Queen, telling her to unmask and kiss "Kal-El".
Reprints
Keywords
Adult Legion; Kandor

Story continued from the previous issue, and continues in next issue. Supergirl's Kryptonian tattoo translates to "Hope". The Kryptonian text on the sign on page 1 is translated as follows: "KNEEL", and on page 3 as "CAT AT JAC'S" (probably supposed to say "EAT AT JOE'S"), and on page 10 as "SAVE YOURSELVES"