The White Sheik (Table of Contents) 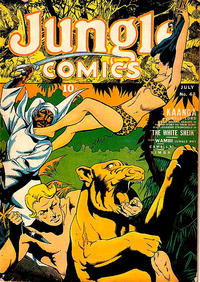 The White Shiek (Table of Contents: 1)

The art includes many swipes.

First Line of Dialogue or Text
One day, as Simba naps at ease, a yapping chorus wakens him...
Genre
animal; jungle
Characters
Simba; Chakas (African tribe)
Synopsis
Simba is humiliated by a pack of hyenas and then trapped by native hunters. He escapes and drives the hyenas into a crocodile pool.
Keywords
hyenas; tiger traps

First Line of Dialogue or Text
You who desire wealth and power...what torturous and crooked path will you not travel to attain your evil ends?
Genre
jungle
Characters
Rajah of Bendali; Shahab; Ogg; Wambi; Shirkar (tiger); Tawn; Sayaa; Sainaab
Synopsis
The rajah's minister, Shahab, in an effort to curry the rajah's favor, falsely identifies Wambi as the rajah's long-lost son. The rajah's men make both Tawn and Ogg prisoners but when Shahab plots to kill Wambi to avoid the rajah becoming too attached, the animals escape. Wambi exposes Shahab's treachery and returns to the jungle.
Keywords
tigers

The Jackal Jests with Death (Table of Contents: 4)

Weapons for Victory (Table of Contents: 5)

First Line of Dialogue or Text
In a dim cave, dug in white rock at the edge of a vast desert...
Genre
jungle
Characters
Ras Re-Hü; Fantomah; Horus; Fury
Synopsis
Fantomah take starving hunting leopards away from their trainer and makes them her pets.
Keywords
apes; crossbows; hunting leopards