Features a fictionalized version of Kenner's Six Million Dollar Man action figure which is featured in the main story. 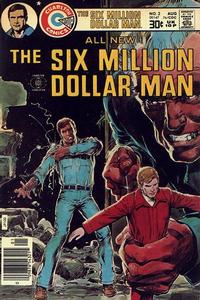 The Effigy (Table of Contents: 1)

This story is notable for incorporating the then-new Kenner action figure based upon the Six Million Dollar Man in a "guest starring role" as the effigy. The final panel of the comic story consists of Steve Austin breaking the "fourth wall" and promoting the Kenner action figure plus the Repair Station and Back Pack Radio accessories.

The location where this is set is not stated, but is assumed to be Ojai (by this point established in the TV series) despite the lack of reference to Jaime Sommers. Although the panels are taken from interior art from issue 1, an image of Steve running has been altered, replacing the suit and pants worn in the original with a red jersey and jeans.