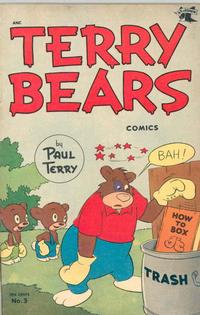 First Line of Dialogue or Text
Since it's your birthday, I'll get a surprise for you.
Feature Logo

Whacky Duck looks like a "duck-version" of the Terrytoons character "Dingbat".

Things Are Not What They Seem to Be (Table of Contents: 6)

First Line of Dialogue or Text
Just wait 'til I lay my hands on you!
Feature Logo

Gandy the Comedian (Table of Contents: 7)

First Line of Dialogue or Text
Sourpuss hadn't been seeing much of Gandy lately but he could HEAR him!
Genre
anthropomorphic-funny animals
Characters
Gandy Goose; Sourpuss; Arthur Dogfrey
Synopsis
Gandy becomes a television stand-up comedian. Jealous Sourpuss wants in on this gravy train, so he steals some of Gandy's written material and strikes-out on his own. Oh, did we say he "strikes-out"?
Keywords
comedian; jealousy; outsmarting one’s-self; television

"Arthur Dogfrey" is a parody reference to then-popular radio and television personality Arthur Godfrey - and a clever one at that, reversing only two letters of the character's surname to suggest a funny-animal character.

A Housing Problem (Table of Contents: 8)

First Line of Dialogue or Text
This solves our vacation problem - we'll put up our own cottage!
Feature Logo

First Line of Dialogue or Text
What did the doctor say about your stomach ache?
Feature Logo

Top half of page.

First Line of Dialogue or Text
Step right up folks -- buy a wallet with a secret compartment for your money!
Feature Logo