This issue was resolicited, hence the gap in months between #7 and #8.
This issue has variants:

Supergirl vs Power Girl... ...For the Freedom of Kandor! (Table of Contents) 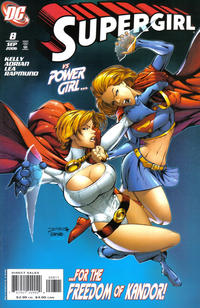 Story continued from the previous issue, and partially continues in the next issue. The Kryptonese text on the signs on page 1 is translated as follows: "OBEY" and "KNEEL". The banner on page 3 doesn't appear to be Kryptonese.

Saturn Queen reveals that her universe and Ultraman's universe were both destroyed by Alexander Luthor in the Infinite Crisis. They both survived in the Phantom Zone.