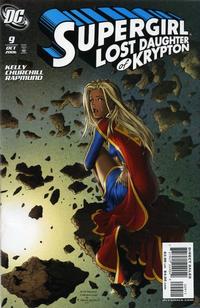 Genre
superhero
Characters
Supergirl [Kara Zor-El]; Power Girl (flashback); Captain Boomerang [Owen Mercer]; Wonder Girl [Cassie Sandsmark] (cameo); Jonathan Kent (flashback, cameo); Martha Kent (flashback, cameo); Zor-El (flashback, cameo); Alura (flashback, cameo); Batman (cameo)
Synopsis
While talking to Boomer, Supergirl flashes back to her recent dispute with Power Girl, visiting Wonder Girl in Themyscira, talking with the Kents, and a fight between her parents on Krypton. She needs money, so she sells a Kryptonian "Sourcedoc" medical device to Batman for one million USD, so she'll never have to worry about money. He tells her that Superman is worried about her. After dinner with Boomer, she saves a girl from a truck and the girl tells Supergirl her new costume is too dark. She returns home, where Wonder Girl appears after a blowout with her mom, and they comfort each other.
Reprints

Story continued from the previous issue. "Special Thanks: Papa Loeb" [Jeff Loeb]. The Kryptonese word that Supergirl uses on page 16 is translated as "CTUMOS", which she says means "sourcedoc" or "reset button".