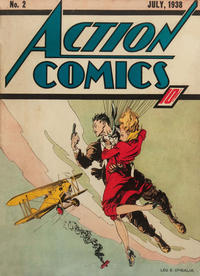 Found on inside front cover.

[The Shipwreck] (Table of Contents: 4)

Elmer the Eel (Table of Contents: 6)

First Line of Dialogue or Text
By the daring of the Polos, the bandits find themselves caught in their own trap.
Genre
historical
Characters
Marco Polo; Niku; Nicolo Polo; Uncle Maffeo
Synopsis
In a narrow mountain pass, Marco sends an avalanche onto the bandits threatening the Polo caravan. The few survivors are taken as hostage for save passage through this dangerous land.

First Line of Dialogue or Text
Chuck Dawson is felled by a bullet in a sidewalk encounter with Trigger and Butch...
Genre
adventure
Characters
Chuck Dawson; Notch Logan; Trigger Holt; Sheriff; Deputy; John Burwell
Synopsis
Having escaped from jail, Chuck continues his quest to bring down the A-G gang who stole his father's property.

Printed in black and white.

The Haunted Farm (Table of Contents: 12)

Gardner Fox credit from interview in Alter Ego #20 (January 2003) in which Fox states this was his first Zatara story.

Starts with a mini-profile of "Lefty" Vernon Gomez, and then discusses pitching and various pitches. Found on the inside back cover.