Indicia at the bottom of the contents page reads: Horror Tales is published by Eerie Publications, Inc. 222 Park Avenue South, New Yor, N. Y. 10003. The publisher assumes no responsibility for unsolicited material. Any resemblance to persons living or dead is purely coincidental. All rights reserved. Copyright under Universal Copyright Conventions. Single-copy prices 35c. Application to mail at second-class rates is pending at New York, N. Y. Printed in U. S. A.

The cover has a distributor's initials: PDC (for Publishers Distribution Services)

Cover text reads:
Featuring
House of Monsters
The Witch and the Werewolf
Plus other spine-snapping tales from worlds beyond. 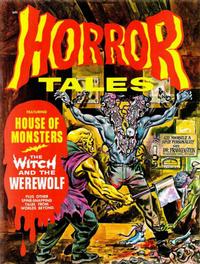 House of Monsters
The grim castle that Paul Dorner inherited was a fiend's dream that combined he forces from beyond with science into horror unequalled. Ye-ech! This is a bloody tale.

The Witch and the Werewolf
Our hero didn't believe in witches or werewolves. He was only a businessman, calling on a client who lived in a haunted house at midnight. Ye-ech! You read it.

The Spirits
A cursed house was that the townsfolk called it. Yet, the artist thought it an excellent place to live...that is, until THEY came. Comem step into my house -- if you dare.

Horror Club
They came in search of happiness, romance, and even marriage, only to learn the club was really the yawning pit of hell. Wan'na join?

Better Off Dead
At the peak of his career the physicians forced him to retire because of a bum ticker. A startling, horrifying tale of a man who was called incurable.

The Unknown
What happens when Lila Simmons, a student of the occult, pries secrets from the dreaded 'black book' of the ancient dead cults. Yikes! Lila! S-stop! Come back! "Gulp!" Too late.

Witches' Haunt
The swamp is a place where slimy, crawling things devour each other! Humans who dare enter, do not come back! Why? Find out in an intriguing, creepy horror that shocks!

House of Monsters (Table of Contents: 2)

Original title: "The Castle of Fear."

The Witch and the Werewolf (Table of Contents: 3)

Original title: "Sssshhh." The story is entirely missing dialogue (no word balloons), with the exception of the last panel.

The Spirits (Table of Contents: 4)

Original title: "The Place on the Hill."

Better Off Dead (Table of Contents: 6)

Monsters for Rent (Table of Contents: 7)

House of Chills (Table of Contents: 8)