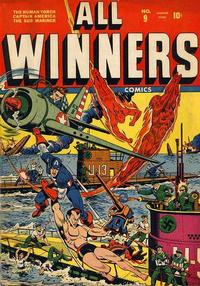 [The Gorilla Men] (Table of Contents: 1)

Genre
superhero
Characters
Human Torch [Jim Hammond]; Toro [Thomas Raymond]; Carl; Bashon and his gorilla-men (introduction; villains)
Synopsis
The Flaming Duo must battle the mad Bashon, a scientific genius who has invented all types of planes, tanks and machinery that he is using to level cities, all with the help of ape men that he has created from the bones of prehistoric people.
Reprints

The Case of the Sinister Hun (Table of Contents: 2)

Sequence, synopsis and all info added by Craig Delich 3-1-09.

Genre
superhero
Characters
Sub-Mariner [Prince Namor]; Colonel Brusch (villain; introduction; death); the Nazis (villains)
Synopsis
Namor lands on the Cretan coast and discovers an airfield full of British bombers--being serviced by the Nazis for an attack on the Dardanelles, in hopes of convincing the Turks that the British are responsible.
Reprints

The Flight from Peril (Table of Contents: 5)

Some info and synopsis added by Craig Delich 3-1-09.

Art credits revised from George Klein [a] to Alan Mandel [p] and unknown inker by Craig Delich. Note, some info and synopsis added by Craig Delich 3-1-09.