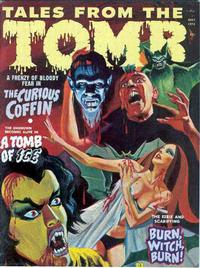 Lists Carl Burgos, Editor; Irving Fass, Art Director and Ezra Jackson, Art Editor. Border art may be from other stories not in this issue.

The Curious Coffin (Table of Contents: 2)

Genre
horror-suspense
Synopsis
An old man gets news attention by claiming to study death. A man and woman criminal team attempt to rob him only to become part of his experiment. Seems the old man traps crooks and kills them, studying how they die. He traps them, hoping to watch them die from starvation only to suffer a heart attack and die himself.
Reprints

Original title: "Dying Is So Contagious."

Genre
horror-suspense
Synopsis
Three mountain climbers and their guide, Oog get ready to get to the top of Everest, when a storm comes up and they are visited by a ghost warning them that the mountain will kill them if they don't go back. Two of the climbers and Oog meet their deaths and the survivor, Sandra makes it back to base camp only to discover that her face has aged considerably.
Reprints

Appears to be a possible tryout of the character. Dated "73" by signature.

Genre
horror-suspense
Synopsis
Satan shows up and has optometrist Harry Lenz make a pair of spectacles. Harry tries them on and finds that he can see through walls and read minds. Killing an old miser (who is really Satan), Harry escapes and goes to Europe, changing his name to Herman Greid, extorts and blackmails his way to riches. Prince Natas and Princess Sedah (read them backwards) con Harry/Herman into financing a revolution. All goes wrong and Harry loses all his money and escapes only to have his glasses stolen by Satan and finds out now he is blind.
Reprints

The Antarctic Horror (Table of Contents: 6)

Invitation from a Vampire (Table of Contents: 7)

Genre
horror-suspense
Synopsis
A gigolo who kills his elderly brides attempts to add another notch to his belt, only to become dinner for a elderly vampiress.
Reprints

Last page on back cover.