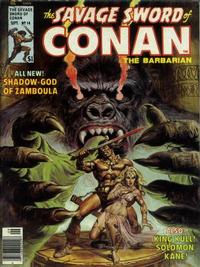 First Line of Dialogue or Text
Having retaken the kingdom of Khauran for its queen...
Reprints

Shadows in Zamboula (Table of Contents: 4)

Adapted from the short story "Shadows in Zamboula" by Robert E. Howard
credits from the letter pages of Savage Sword of Conan (Marvel, 1974 series) #14 and #16

The Worms Return (Table of Contents: 5)

First Line of Dialogue or Text
It's back in print! Again.
Characters
Conan
Reprints

The Silver Beast beyond Torkertown (Table of Contents: 8)

On the contents page the title was given as "The Silver Beast out of Torkertown."