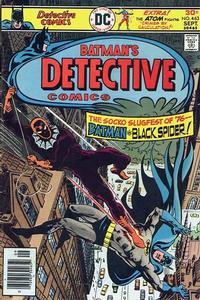 City Commissioner Arthur Reeves introduced here and featured in issue #464 as well, returns in issue #503 as Councilman Reeves who announces he is running for mayor of Gotham City. His dislike for Batman as evidenced in this issue will feature prominently in his run for mayor.

Crimes by Calculation (Table of Contents: 3)

Part 1 of the Calculator serial; story continues in Detective #464.