Crisis in Eternity! (Table of Contents) 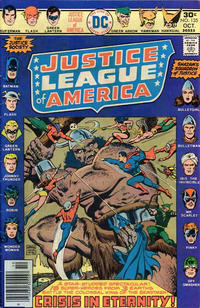 Crisis in Eternity! (Table of Contents: 1)

Earth-S named in this issue, original debut in Shazam! (DC, 1973 series) #1, unnamed. Only time the Earth-2 Batman was fully used in a JLA/JSA adventure, given his first appearance was in #91, but only as a brief cameo, since he was Gotham City's Police Commissioner on Earth-2, as revealed this issue and seen in the All-Star Comics (DC, 1976 series) revival of the 1970's, and was retired from the JSA.