"A DC-Marvel Production" on spine. Indicia reads "Published by" and "Copyright © 1976 National Periodical Publications, Inc. [a.k.a. DC] and the Marvel Comics Group, a division of Cadence Industries Corporation," but National's address is given as Office of Publication.

On-sale date per Comic Reader #126, as well as a scan of The Amazing World of DC Comics #9 on Rob Kelly's Treasury Comics website. Also, the Marvel UK comics of the time bear this out, as they run back-cover ads for this title on the issues dated "week ending Jan. 10, 1976" and "Jan. 17". As the British Marvels were published at the actual time of their cover-dates, this confirms that this title was on sale in the UK during January 1976.

Credits based on interviews conducted by Daniel Best for article available at Adelaide Comics and Books website [accessed 26 August 2009]. Official credits in publication are "drawn by" Andru and "inked by" Giordano. Splash page reads "Presented by: Carmine Infantino and Stan Lee"; this was changed to "Edited by" in the 1991 Crossover Classics collection, but no primary editor is given in the original. Conway told Steve Cohen that he "did the actual editorial work," i.e. "proofing, supervision of production, supervision of art and lettering and coloring" [via Facebook 4 September 2009]. Lee's introduction says literary agent David Obst "started the entire project". DC/National production manager Sol Harrison "co-ordinat[ed] the project" with the assistance of his Marvel counterpart Sol Brodsky per Infantino's introduction.

Full indicia: "SUPERMAN VS. THE AMAZING SPIDER-MAN. Published by National Periodical Publications, Inc. and Marvel Comics Group. Office of Publication: 75 Rockefeller Plaza, New York, N.Y. Copyright © 1976 by National Periodical Publications, Inc. and the Marvel Comics Group, a division of Cadence Industries Corporation. All Rights Reserved. The stories, characters and incidents mentioned in this magazine are entirely fictional. No actual persons, living or dead, are intended or should be inferred. Printed in the U.S.A."

The Battle of the Century (Table of Contents) 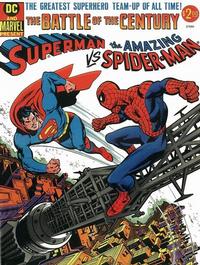 A Soliloquy from Stan Lee; A Comment from Carmine Infantino (Table of Contents: 1)

The inside front cover presents "A Soliloquy from Stan Lee" and "A Comment from Carmine Infantino" above indicia.

The Battle of the Century! (Table of Contents: 2)

The first interior page is a pin-up of the heroes facing off above the credits and story title.

The Battle of the Century! Prologue 1 (Table of Contents: 3)

Pgs. 1-15. Main title from title page. According to a letter in Back Issue #66 (August 2013), Terry Austin asserts that he was Dick Giordano's sole background inker in this period. He explains; "I was hired by Dick Giordano in the summer/early fall of 1974 when Klaus Janson vacated the position. I was Dick's only background inker for every project that he worked on for the next three years that I was in his employ." Page 2 has "Terry's Bar" and page 3 had "Austin Bread" as businesses drawn into the cityscape. Previous indexer credited Joe Rubinstein and Bob Wiacek with assists.

Now a Pause for Hero Identification (Table of Contents: 4)

Superman's origin is recapped on an unnumbered page.

The Battle of the Century! Prologue 2 (Table of Contents: 5)

Yet Another Pause for Hero Identification (Table of Contents: 6)

Spider-Man's origin, powers, and gadgets are recapped on an unnumbered page.

The Battle of the Century! Prologue 3 (Table of Contents: 7)

Pgs. 31-35. Main title from title page. According to a letter from Terry Austin in Back Issue #66 (August 2013), Bob Wiacek inked backgrounds on three pages of this chapter only. This information was confirmed by Wiacek.

And Leave Us Not Forget Our Villainous Villains (Table of Contents: 8)

The villains' origins are recapped on an unnumbered page.

The Battle of the Century! Chapter One: A Duel of Titans (Table of Contents: 9)

Pgs. 36-45. Main title from title page. "One" is spelled out, but later chapters use numerals.

The Battle of the Century! Chapter 2: When Heroes Clash! (Table of Contents: 10)

Pgs. 46-59. Main title from title page. First meeting of Superman and Spider-Man, after a brief exchange as Peter Parker and Clark Kent in previous chapter.

The Battle of the Century! Chapter 3: The Call of Battle! (Table of Contents: 11)

The Battle of the Century! Chapter 4: The Doomsday Decision (Table of Contents: 12)

The Battle of the Century! Epilogue (Table of Contents: 13)

How This Famous Cover Was Born (Table of Contents: 14)

The inside back cover presents Infantino's cover sketches, followed by a black-&-white reproduction of the end result.