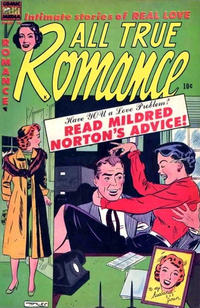 Genre
romance
Characters
Bobbie Wills; Chris Martin; Jim; Jack
Synopsis
Bobbie has a reputation as an “easy mark.” She hopes her new boyfriend Chris will treat her with respect. At first he seems to be the same lecherous type as the men she’s known, then he lectures her about leading men on. She says she’s just lonely and searching for love, but men only want one thing. Chris confesses he really loves her and was only trying to ascertain her true nature.

Genre
crime; romance
Characters
Helen Marshall; Jay Donnelly; Mac; Jonah
Synopsis
Ad executive Helen and her boyfriend Jay vacation in the Bahamas. Her bossy and know-it-all manner results them in being taken prisoner on an isolated island by Mac, who is searching for buried treasure. Jay pretends to be fed up with Helen and joins Mac in his quest, but it’s just a trick to defeat the criminal. Helen apologises to Jay for her domineering manner and promises to treat him like an equal partner in their relationship from now on.

The Beautiful Bedroom (Table of Contents: 4)

Text story is split in two parts (each one page) and accompanied by small illustrations (probably by Pete Morisi).

Genre
romance
Characters
Amy Bliss; Garry Hart; Joey Carew; Mr. Bliss
Synopsis
Engaged for 2 years, Amy still refuses to marry Garry until their house is built and furnished and their finances are more secure. Garry breaks up with her and she dates womaniser Joey, who criticises her for leading him on and says Garry was right to dump her. Amy tracks down Garry at a waterfront dive; Joey is also there, and when he makes a pass at Amy, Garry defends her. Amy says she’ll marry Garry right away.

Amy is referred to as "Ann" and Garry is spelled "Gary" at various points in this story.

First Line of Dialogue or Text
This is Sheila Bonden, readers, and she has a very unusual problem for us.
Genre
non-fiction; romance
Characters
Sheila Bonden; Maureen Bonden; Bill Bennett; Mildred Norton
Synopsis
Sheila and her sister Maureen tell Mildred Norton that Bill Bennett is in love with both of them. Mildred asks readers to write in with advice.

Advice column in comic form, readers are challenged to write their advice - to Mildred Norton, of course.

Genre
crime; romance
Characters
Honey Childs; Larry Brock; Don Phail
Synopsis
Nightclub singer Honey falls for magician Don. Club owner Larry tricks Honey into delivering a suitcase full of heroin, and claims her as his new girl. Honey protests and flees, right into the arms of Don, who is actually an undercover federal narcotics agent. Larry and his henchmen are arrested, and Don and Honey kiss.