[Egg On His Face] (Table of Contents)

New cover for an issue of reprints. 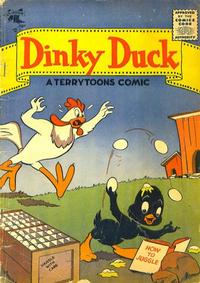 First Line of Dialogue or Text
Oh, boy! All I have to do is sell 100 bottles of shampoo and I win the big surprise prize!
Feature Logo

Licking the Job (Table of Contents: 3)

First Line of Dialogue or Text
Gimme that string, boys, and let an expert show you how to fly a kite!
Feature Logo

First Line of Dialogue or Text
Gamma Globulin – obtained from human blood – gives protection for a few weeks. However, it is in VERY SHORT SUPPLY. Meanwhile – when polio is around - follow these precautions.
Keywords
polio; precautions; public health; public service announcement

A little girl, something of a cross between Little Lulu and Ernie Bushmiller’s Nancy, demonstrates the suggested precautions… “Don’t mix with new groups”, “Don’t get overtired”, “Don’t get chilled”… “But do keep clean”. Art is contained in four individual circular panels.

First Line of Dialogue or Text
Look, Rudy! I got a letter!
Feature Logo

Over Exposed (Table of Contents: 8)

First Line of Dialogue or Text
There! Now when that's covered with this black cape, Little Roquefort will never know the difference!
Genre
anthropomorphic-funny animals
Characters
Percy Puss; Little Roquefort
Synopsis
Percy tries the old cartoon-standard trick of disguising a shotgun as a camera on a tripod, telling Little Roquefort “…I am going to SHOOT your picture with my special new camera!” Roquefort, who’s acted in a carton or three and knows his stuff, maneuvers Percy into position to catch the blast himself.
Reprints
Keywords
camera; cartoon-trope; inattentiveness; shotgun; turning the tables

George Crenshaw credit from Alberto Becattini (2020). The very same "cape" that Percy describes as "black" in the first line (above), is colored white with blue-streak highlights throughout the story.

First Line of Dialogue or Text
One day, Dimwit was almost completely startled out of his wits.
Genre
anthropomorphic-funny animals
Characters
Dimwit; Farmer Gray; Sylvester Fox; chickens
Synopsis
Farmer Gray employs Sylvester Fox as a hired hand to keep him from sneaking onto the farm and teasing the chickens. Dimwit is uncertain of what to make of this unusual turn of events. Eventually, though, he comes through as Farmer Gray had hoped.
Reprints
Keywords
chickens; dog; farm; fox; softening of story content; teasing; uncharacteristic situation

Uncharacteristic soft-pedaling is employed in this story - especially for the more rough-and-tumble time of 1953 (when this story was originally published), vs. the present day where it's become the norm. Sylvester Fox does not plan to steal the chickens, or eat them... but tease and frighten them instead. That is his only aim, supported by these quotes:

"Sylvester's reputation with chickens was a very poor one. He never missed an opportunity to tease and frighten them. It seemed to be Sylvester's chief pleasure - why, he would rather tease the chickens than do anything else!"

"With Sylvester working out in the fields, [Farmer Gray] didn't have to worry at all about his chickens being teased."

"...[Sylvester was] edging over very quietly to the chicken coop where the chickens were busy eating! If he ever frightened them now, they'd be sure to have an attack of indigestion and they wouldn't lay eggs for weeks!"

In a similar text story in Issue # 5 of this title, Sylvester Fox stole chickens with the intent of consuming them. This issue displays the “Comics Code Seal”, but the issue in which this story was originally printed (#7, 1953) was not yet subject to the code. Could the possible threat of the coming "Comics Code" be responsible for such a clear "softening" of 1953 story content?

The Retriever (Table of Contents: 11)