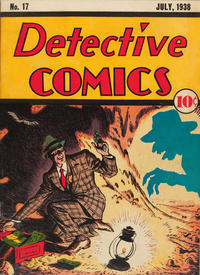 The Snake Death (Table of Contents: 2)

Guardineer signs in the final panel.

First Line of Dialogue or Text
Gosh! The Black Mask Gang...
Genre
humor
Characters
Oscar the Gumshoe
Synopsis
Oscar receives a note telling him of the whereabouts of the Black Hand Gang, notorious bank robbers. He and a squad of police advance on a shack, kick in the door, and find a gang of kids who are amused that the cops have fallen for their prank.

First Line of Dialogue or Text
Van Ruyter has, after two years...
Genre
adventure; detective-mystery
Characters
Cosmo; Von Ruyter (introduction); Countess Varnoff De Mornay (villain, introduction)
Synopsis
Von Ruyter has invented a new form of high explosive gun. Tests for the War Department are spectacular, and they ask permission to install a battery of guns in one of their Pacific possessions. The plans are stolen, however, and his friend Cosmo goes off to investigate, finally uncovering the Russian Countess De Mornay. She gets away with false plans Cosmo has planted. The diagram shows the monkey cage in the Bronx Zoo, and the formula is that for castor oil.

Adapted from The Insidious Dr. Fu Manchu by Sax Rohmer; also reprinted in Wow -- What a Magazine! (Henle Publications, 1936 series) #1-4.

The Hooded Hordes (Table of Contents: 7)

Disaster on the Diamond (Table of Contents: 8)

The Right Trail (Table of Contents: 10)

Slam Bradley Gets the Air (Table of Contents: 11)