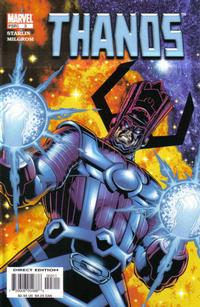 Genre
superhero
Characters
Galactus [Galan of Taa]; Eternity; Moondragon [Heather Douglas]; Thanos; Adam Warlock [Him]; Recorder; Hunger; Rigellian Grand Commissioner; Pip the Troll; an unnamed skeleton (see notes)
Synopsis
Galactus flashes back to his origins while his calculations are revealed to us: Galactus has found a way satiate his hunger indefinitely! Thanos attempts contact (via Moondragon's powers) and learns part of the plan. Galactus causes a sun to go nova to open a portal to another realiy in order to obtain a peculiar fanged skeleton, which has one of the Infinity Gems on its breastbone.
Reprints
Keywords
cosmic

The skeleton was originally drawn to be Rune's, since it has an Infinity Gem which he was known to have possessed, but was changed a bit because Marvel didn't have the rights to the Rune character. (Jim Starlin stated this on Newsarama).