[Bride and Groom with big teeth] (Table of Contents) 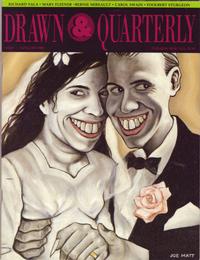 Synopsis
Picture of a matchbox with a mountie on a zebra.

Synopsis
Indicia and table of contents.

Synopsis
Two pictures of dogs that look a little like Snowy from Tintin.

One of the Wonders of the World (Table of Contents: 5)

Synopsis
A paranoid man with the mind of an ape builds a monument on his house to a dead dog.
Reprints

Signs of the Times (Table of Contents: 6)

The Conspiracy Nuts (Table of Contents: 7)

The Journey of Ticoune and Marco (Table of Contents: 8)

Synopsis
A picture of plane and two heads.

Title from contents page, may not be a strip but simply three illustrations.

Genre
biography
Characters
Joe Matt; Dave; Dave's older brother [Farmer]
Synopsis
Joe explains how his best friend when he was a kid grew up faster than him.
Reprints

Genre
biography; satire-parody
Synopsis
A comic artist decides that sex and violence will make his comic sell but then he hears about a massacre at a Montreal University.
Reprints

Note at the bottom of the strip states that "the first version of this cartoon appeared in Comics F/X No. 16 June/July '90." It has been completely re-drawn for this printing. Also a note that the title (and background music in some of the panels) comes from a song by Joe Jackson.

First Line of Dialogue or Text
So... Youre place or mine?
Genre
biography
Characters
Julie Doucet
Synopsis
Julie and her boyfriend walk drunk through the snow.
Reprints

Synopsis
A couple walks through a demonstration and goes to an art gallery.

The Early Adventures of Paddy Booshwah (Table of Contents: 18)

Genre
humour
Synopsis
A rock saves the world from an ink spot.

First Line of Dialogue or Text
May Be I Don't Really Exist....
Genre
biography; fantasy-supernatural
Characters
Julie Doucet
Synopsis
Julie takes a bath and the bathtub starts talking to her.
Reprints

Synopsis
A picture of a square-eyed mask.

Title from table of contents.

Genre
biography
Characters
Ida Marx
Synopsis
Ida runs into an old friend who she has grown apart from and remembers how they were as children.

Genre
romance
Synopsis
Wordless story about a couple who pick a flower and deflate the world.
Reprints

Title from reprint. Original was untitled.

Back Issues (Table of Contents: 25)

Synopsis
Short biographies of all the creators, list of the back issues that are available and subscription info.

Genre
humour
Synopsis
A man does what he wants every day.

Genre
biography
Synopsis
Rena explains how people don't believe she is working when she writes at home.

On back cover of magazine.