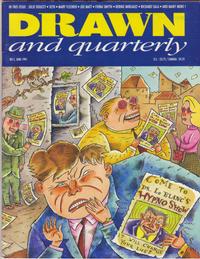 My Father ["My father's a brain specialist"] (Table of Contents: 1)

Genre
drama
Synopsis
Four panels about a family and their relationships to head injuries.
Reprints

Synopsis
Table of contents, indicia, short bios of the creators.

The Somnambulist (Table of Contents: 3)

Genre
drama
Synopsis
A man is hypnotized into committing robberies, but remembers nothing about it.
Reprints

Synopsis
Individual panels for each letter illustrated with an element of war.
Reprints

There's More To Drawing These Comic Strips Than Meets The Eye! (Table of Contents: 5)

The Gross Out Contest (Table of Contents: 6)

Genre
humour
Synopsis
A young brother and sister try to gross each other out while their mother is out.

Division of work is unclear, but appears to be as shown.

Mr. Pig Nose Goes For A Walk (Table of Contents: 7)

Title is slightly mis-spelt on story.

Each page is titled, but has "continued" at the bottom. Individual pages are "Sexaholics Anonymous", "Joe Matt's Gallery of Grudges", "Trish!", "Monkey Business", "My Ego", "God", "Out to Lunch" and "Sexaholics Unanimous".

She Loved Me So Much (Table of Contents: 15)

On back cover of magazine.