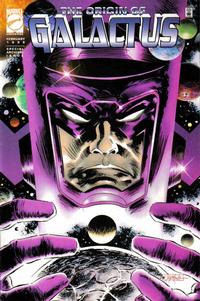 Genre
superhero; science fiction
Characters
Galactus; Ecce the Watcher; The Wanderers
Synopsis
In a dying universe, on the planet of Taa, scientist Galan tries to find a way for his race to survive the end of the universe. He commandeers a spaceship towards the center of the imploding universe, but he does not die in "the big crunch". Instead, he gestates in a cocoon for billions of years in a newly-formed universe. When he emerges, it is as Galactus, and he has to feed upon the lifeforce of planets.
Reprints

Re-Telling of the Origin of Galactus. Original Story done by Lee, Kirby, Colletta and Klein with some panels modified or rearranged. New material done by the other artists.