The on-sale date is the publication date reported in U. S. Copyright Office filings and Comic Reader #136.

Stop It, Superman! You're Wrecking the World! (Table of Contents) 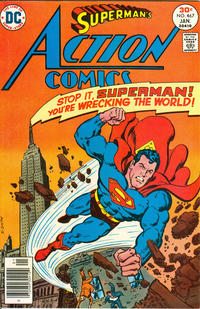 Stop It Superman -- You're Wrecking the World! (Table of Contents: 1)

A Superman's Best Friend Is His Superdog! (Table of Contents: 4)