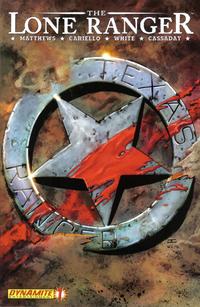 The Lone Ranger (Table of Contents: 1)

Title, credits and indicia, on the inside front cover. Dimmed background illustration is from an interior page.

First Line of Dialogue or Text
Be nice to get out of the sun...
Genre
western-frontier
Characters
John Reid [The Lone Ranger]; Dan Reid (death); Tonto (cameo)
Synopsis
John Reid joins his father and brother in the Texas Rangers. Their crew of Rangers is ambushed while pursuing a criminal and all but John are killed.
Reprints
Keywords
Texas Rangers

Artist Sergio Cariello's name is misspelled in the credits for this issue.

Letters from: Rob, Patrice, and Brandon. Comics promos, This Month from Dynamite.

Get the Latest News on Dynamite Entertainment (Table of Contents: 11) (Expand) /