Indexed with information from Saltarella via the GCD Error Tracker and from inducks.org. 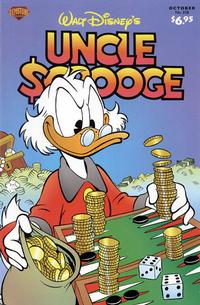 First Line of Dialogue or Text
This issue features another nice double-dose of late vintage Carl Barks for you Barks aficionados.

Creator and editorial credits. Black and white on inside front cover.

House of Haunts (Table of Contents: 2)

First Line of Dialogue or Text
For months Uncle Scrooge has spent his nights in his Money Bin!
Feature Logo

Uncle Scrooge Western Logo # 1
Genre
anthropomorphic-funny animals; humor
Characters
Uncle Scrooge; Donald Duck; Huey; Dewey; Louie; The Beagle Boys; professorial warden of Studious Hours Prison; Scrooge's psychologist; bank teller; bank guard; judge (owl)
Synopsis
To keep his money safe from the Beagle Boys, Uncle Scrooge surreptitiously hides the cash in the eerie old castle of The Mad Duke of Duckburg. The Beagles get Scrooge to inadvertently lead them to the cash-filled castle, and then give Scrooge a case of amnesia. When the Beagles find themselves imprisoned by the Mad Duke's gauntlet of booby traps, there's no one to remember that they were ever there.
Reprints
Keywords
amnesia; booby traps; castle; criminal rehabilitation; money; social commentary

Job Number
D/D 2003-003
First Line of Dialogue or Text
The Junior Woodchucks and General Snozzie, their official hound, are searching the Duckburg badlands for ways to earn merit badges in Paleontology!
Genre
anthropomorphic-funny animals
Characters
Huey; Dewey; Louie; General Snozzie (the Official Woodchuck Hound); various other Junior Woodchucks; Uncle Scrooge; The Great J.A.W.B.O.N.E. (Woodchuck leader); members of Uncle Scrooge's construction crew; land office clerk; interior decorators; Colossosaurus (fossilized dinosaur skeleton)
Synopsis
The Junior Woodchucks uncover the skeleton of Colossosaurus, "...the largest creature ever to live". Uncle Scrooge has plans to build a new super highway directly through the site of this historic find. He later has a change of plan, and decides to convert the massive skeleton into a gaudy dinosaur-themed restaurant attraction - complete with crass curtains and a rock band to play in the skull's sinus cavities. Can the Woodchucks and their Official Hound save the fabled fossil from such a fate?
Reprints
Keywords
conflicting ideologies; confrontation; desert setting; dinosaur; environmental awareness; fossil; redrawn story; working-at-cross-purposes

This story was originally published in Huey, Dewey, and Louie Junior Woodchucks #8 (1971) with story by Carl Barks and art by John Carey. Years later it was redrawn in a more "Barksian style" by Daan Jippes.

Hive Been Better (Table of Contents: 6)

Gemstone Publishing Presents More DuckTales Before They Were DuckTales by Carl Barks (Table of Contents: 7) (Expand) /

Dance of the Cuckoos (Table of Contents: 8)

The Terror of Outer Space (Table of Contents: 9)

Job Number
D93507
First Line of Dialogue or Text
I have a whale of a time diving through my money like a porpoise!
Feature Logo

Story is listed as "The Terror from Outer Space" on the credits page.