The Fall of the Ring (Table of Contents)

The cover is a wraparound. David Porch is credited for painting over Hanther's pencils on this cover in an issue of Dragonrok. Also numbered as c-31. 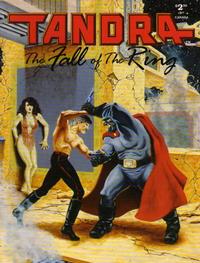 Characters
David Galon; Kilthane
Synopsis
An enlargement of an interior panel used as a title page.

Synopsis
Synopsis of the relevant story to this point surrounded by a Hanther illustration of buildings used in previous issues as a border.

The issue is printed in dark blue ink instead of black, hence the color credit.

The Fall Of The Ring (Table of Contents: 4)

Genre
science fiction; adventure
Characters
Lord Kilthane; David Galon; Danene; Bragg Havok; Javilus; Orline; Kalliste; Frank Clayton; Jenita; Mike Steele
Synopsis
Despite being stripped of his title, ordered to cease all operations on Tandra and confined to house arrest, Kilthane has no intention of lying down and Galon realises there must be a final confrontation.

This encompasses strips 691-718 of the ongoing Tandra saga. While individually titled, as part of a complete sequence, they are indexed together. The story is told by blocks of text accompanied by illustrations, and is printed in dark blue ink on white. The story continues in Dragonrok Saga (Hanthercraft Publications, 1993 series) #1 (1993)

Synopsis
Letters page with illustration of the editor.