On sale date taken from promo in previous issue and from Comic Reader #139. 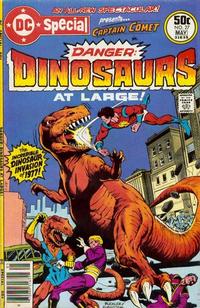 (1) Dr. Schmidt incorrectly refers to Brent Wood as a Colonel (he is a Captain in 2056).
(2) According to the editorial page in DC Special #27 (Apr-May 1977), the story in that issue occurs in 2056 during the height of Tommy's career, placing it somewhere between Action Comics #212 and #226. Given that the Tommy Tomorrow of 2056 is not depicted in his own feature in Action Comics #224 (he appears only in flashback to an earlier time), it is logical to assume that the events of DC Special #27 occur during that absence.
Inking credited previously credited to Joe Rubinstein. Terry Staats confirmed with Joe via Facebook messenger on October 1, 2018 that Neal Adams, Dick Giordano, and Klaus Janson assisted him on some pages due to deadline.

And Now...Still Another Message of Untold Importance from Our Prolific Publisher!! (Table of Contents: 2)

Discussion on the genesis of the story.

If This Is the Future, You Must Be Tommy Tomorrow (Table of Contents: 4)