My Love Was Wrong! (Table of Contents) 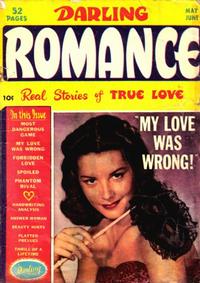 My Phantom Rival (Table of Contents: 2)

Story is rather obviously based on "Rebecca" by Daphne Du Maurier.

Genre
romance
Characters
Brenda; Lee Crawford; Tim; Larry; Sarah; Dr. Berger; Dr. Alice Saxon
Synopsis
Brenda and Lee are engaged but when Brenda’s brother has a nervous breakdown and she learns one of her aunts was insane, Brenda fears it’s hereditary. She breaks up with Lee, but later learns Tim’s illness was caused by a blood clot. Brenda searches for Lee and sees him dining with a woman. She fears she’s lost him, but the woman is a doctor that Lee brought in to help in Tim’s case. Brenda and Lee are reunited.

The Most Dangerous Game! (Table of Contents: 6)

Genre
romance
Characters
Jean Winters; Mr. Winters; Mrs. Winters; Joe; Mr. Walsh; Hank Barton; Lucky Largo
Synopsis
Diner waitress Jean falls in love with truck driver Hank, then meets slick Lucky, who’s opening a gambling hall nearby. Jean learns Lucky and his henchman intend to hijack a shipment of furs that Hank is driving. They use her to try and stop Hank’s truck, but he crashes into their car instead. The crooks are killed and Hank forgives Jean for her unfaithfulness.

You Can Be a Prettier Darling / activity / 0.33 page (report information)

My Love Was Wrong (Table of Contents: 10)

Genre
romance
Characters
Dennis Hunt; Vera Beck; Mr. Beck; Mrs. Beck; Kent Combs
Synopsis
Dennis and Vera are childhood sweethearts. When they graduate, they intend to wed, but Vera’s parents urge her to wait, since she’s never dated anyone else. They try to set her up with Kent; Vera and Kent decide to play along “on a friendly basis.” However, Kent falls in love with Vera for real. She turns him down, but Dennis finds out and breaks up with Vera. Kent and Dennis fight, and Dennis confesses that he met someone he really loves. Vera realises she loves Kent, so everything is alright.

Genre
romance
Characters
Trudi; Artie Jenks; John; Jim; Roy Small; Ann; Peter
Synopsis
Trudi grows up spoiled, demanding the best from her parents and boyfriends, regardless of the cost. All that matters is that she gets what she wants. She meets Roy and falls for him, but he returns to his home town and never writes. When Roy returns, Trudi makes an effort change her selfish ways. Roy says he didn’t write because he had feelings for her but didn’t want to love a spoiled woman. But now they can be together because she’s changed.