"Is This the Way a Deathlok Dies--?" (Table of Contents) 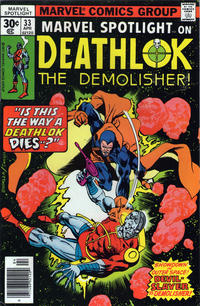 Genre
science fiction
Characters
Deathlok [Luther Manning]; Devil-Slayer [Eric Simon Payne] (introduction, origin); Godwulf; Cory Payne (introduction); Hellinger (villain); Nina Ferry (cameo); Major Simon Ryker (cameo)
Synopsis
Deathlok is transported to earth in the year 1976 by Godwulf. He encounters Devil-Slayer who attacks him because he assumes he was sent by the Cult. While fighting Deathlok encounters Cory Payne (the Devil-Slayer's wife) who is the exact image of Janice Manning, Deathlok's ex-wife. Deathlok figures out he has gone through a time warp and ends the battle but he is then transported somewhere else.
Reprints

Story continues from Astonishing Tales #36 and in Marvel Two-In-One #26. There is a splash page dedication to the band Blue Oyster Cult for the title of this story.

Devil-Slayer is a similar character as Kraft's and Buckler's Demon Hunter (Seaboard, 1975 series) #1. Kraft continues Devil-Slayer's story in Defenders #58-60 and Buckler carries the concept on his own in Galaxia Magazine (Astral Comics, 1981 Series) #1 (June 1981).

Is There Anyone Who Still Hasn't Subscribed to FOOM? (Table of Contents: 3) (Expand) /

The Power of Laser Technology Brings You the Holo-Man Adventure Kit!! (Table of Contents: 4) (Expand) /

Synopsis
Letters from (and replies to) Jeff Meyer, Domenic Bruni, Mike Christiansen and Jana C. Hollingsworth; also includes a small box explaining that this the last issue of Marvel Spotlight but they will be putting more emphasis on Marvel Premiere (currently featuring the 3-D Man).

Appears between pages 11 and 12 of the story.