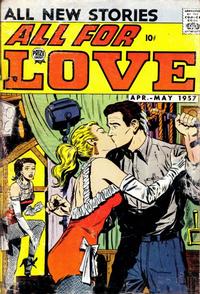 Genre
romance
Characters
Julie Ferne; Mr. Ferne; Mrs. Ferne; Rita; Dick; Miss Barnet; Dr. Larson
Synopsis
Julie vows that her wedding will be even grander than her sister Rita’s. Two years later, Julie becomes engaged to Dick and insists on a fancy ceremony even though her family can’t afford it. She argues with Dick as well. Rita arrives and says financial problems are causing strife in her marriage. Julie changes her mind and insists on a simple wedding, which fixes everything.

Per Nick Caputo, November 2014, Jack Kirby likely did some alterations on figures on the splash page and the last panel on page 5.

Eyes Have It (Table of Contents: 2)

Genre
romance
Characters
Martha Dyers; Hazel Gray; Jim Hunter
Synopsis
Martha falls in love with her boss Jim, even though he’s engaged to his secretary Hazel. When Hazel’s son from a previous marriage is injured, Martha fills in for her at the office. Martha sabotages Hazel’s work and Hazel quits. Jim kisses Martha but Hazel arrives and exposes Martha’s perfidy. Jim marries Hazel and they move away, leaving Martha behind.

Hazel's last name is first given as "Gray" but in the last panel it's listed as "Mackey."

I Was Only Cheating Myself (Table of Contents: 4)

Genre
romance
Characters
Sue Gordon; Edna Vernon; Al Baker; Miss Vandervert
Synopsis
Sue, personnel supervisor at a factory, has a crush on fellow worker Al, but learns employee Edna is also in love with him. Sue decides to resign, but Al admits he loves her, not Edna. Sue and Al get married.

Take It Easy (Table of Contents: 5)

My Wishful Heart (Table of Contents: 6)

Genre
romance
Characters
Abby Barnhart; Mrs. Manning; Alan Hall
Synopsis
Abby loves her boss, lawyer Alan, and becomes jealous when he pays attention to a new client, wealthy young widow Mrs. Manning. Abby considers sabotaging Alan’s case since that would mean Mrs. Manning would dump Alan, but is too ethical to do it. Alan wins with Abby’s help. Afterwards, Abby thinks she’s lost him, but Alan proposes marriage to her.