This issue went on sale three weeks after its solicited date.
This issue has variants: 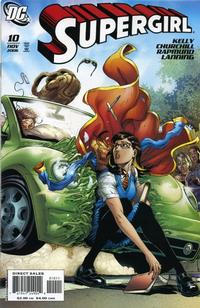 First Line of Dialogue or Text
All that pressure --

Public service announcement from the Office of National Drug Control Policy and Partnership for a Drug-Free America, promoting the abovetheinfluence.com campaign.
Inside front cover.

First Line of Dialogue or Text
Look, I'm not saying I'm an expert. Dropped outta school at fifteen --
Genre
superhero
Characters
Supergirl [Kara Zor-El; as Claire Connors]; Captain Boomerang, Jr. [Owen Mercer]; Wonder Girl [Cassie Sandsmark]; Monsieur Mallah (cameo); Becky; Drew; Sarah; Zor-El (flashback, cameo); Streaky (unnamed, cameo)
Synopsis
Supergirl is now Claire Connors, new at Guggenheim High School. A geek group invites her to sit with them at lunch. She flashes back to harassedment on Krypton as part of the El family. Later, she asks advice from Wonder Girl while fighting Monsieur Mallah. Becky hears Drew asking Supergirl out and invites her to a sleepover. Supergirl invites Sarah but the girls embarrass Sarah. Next day, Becky apologizes but posts things on the internet. Sarah pranks Supergirl and Becky tells her to stay away from her boy Drew. After confrontation with a "cool kid", she takes off her wig and flies away.
Reprints

A rough translation of the French spoken by Monsieur Mallah on pages 6-8 is that he is looking for his friend in a bottle, and that his existence is futile without the Brain.