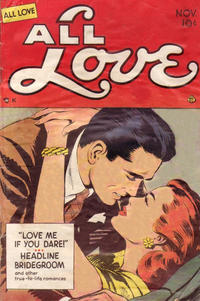 Married in Haste (Table of Contents: 2)

Genre
romance
Characters
Patricia; Dennis Phelps; Mrs. Phelps; Irene Logan
Synopsis
Secretary Patricia saves her money for a month’s vacation at the “swank Golden Swan Hotel.” She meets and marries fellow guest Dennis. They move into the house with his mother, who is possessive and domineering. Patricia asks Dennis to choose between them; when Dennis says he can’t leave his mother, Patricia departs. Dennis asks her to return but she refuses, and later sees him with Irene. Patricia offers to set Dennis free, but he shows her a new home he’s just purchased, for them alone. He’s broken away from his mother’s domination.

I Took Lessons in Love (Table of Contents: 3)

Genre
romance
Characters
Tod Anderson; Penny; Professor Giles Rogers; Lilith; Uncle Abner
Synopsis
Tod breaks up with his college girlfriend Penny thanks to the influence of psychology professor Giles and his secretary Lilith. Penny complains to Giles and he agrees to help her get Tod back by posing as Penny’s new fiancé. Tod becomes jealous and asks Penny to come back but she refuses when he hits Giles. Giles and Penny admit they love each other, and Giles has to revise his “rules for catching a man.”

Genre
romance
Characters
Anne Blaine; Jeff Raye; Rod Dean
Synopsis
Jeff is hired as a trick rider in the circus part-owned by performer Anne. He strongly resembles Anne’s fiancé Barry, who committed suicide and blamed her. Jeff and Anne fall in love, which makes circus manager Rod jealous. Anne learns Jeff is Barry’s stepbrother and fears he’s out for revenge. However, Anne saves Jeff from a loose lion and Rod is exposed as the villain behind all of the intrigue, including Barry’s death. Jeff and Anne can now be together.
Keywords
circus; suicide

Chats on Charm (Table of Contents: 6)

Genre
romance
Characters
Kirby Myles; Carol Lawes; Aunt Margo; Sue Ellen
Synopsis
Kirby departs to become a movie star, leaving his hometown sweetheart Carol behind. After a time, Carol dates Dick and agrees to marry him. When Kirby returns for a visit, he says he still loves Carol and forces her to leave with him, hoping for a lot of publicity for their “elopement.” Their car is wrecked and Dick arrives to take Carol home.