[The Cross-Draw Kid] (Table of Contents) 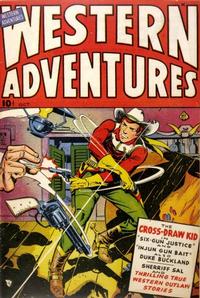 Elkan is best spotted by heavy brush inking, his faces and an abundance of wavy hair on the head.

Carlson is not credited on work for Ace Periodicals, but his brisk horses with outstretched frontlegs are not to be mistaken. Also some faces with sharp eyes are to be noticed. He had most of the "Rocky Lane" stories for Fawcett.

Rudy Palais is recognised by his faces with pouchy eyes in sideview, and also bold and lively inking.

Slaughter on the Fourth of July (Table of Contents: 5)

The Lost Bonanza (Table of Contents: 6)