Since Ace used Leroy lettering exclusively by the end of 1952, the handlettered second and fourth story are reprints from earlier romance titles. 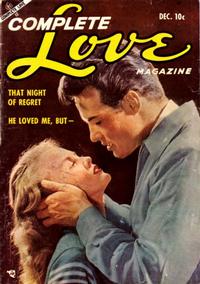 That Night of Regret (Table of Contents: 1)

Genre
romance
Characters
Judy Sherrill; Stowe Albertson; Buck Lacey; Jack; Marcia; Judy's stepfather
Synopsis
Diner waitress Judy agrees to date Buck, although he’s a slightly shady character. They elope, but when she changes her mind he refuses to let her go. Buck is sent to prison and their marriage is annulled. Judy rebuilds her life and several years later owns multiple restaurants. She’s courted by wealthy Stowe, who knows about Buck and says he’ll protect her if her ex ever shows up. They fall in love.

Genre
romance
Characters
Wendy Mayo; Peter Hardin; Justine Vaughn (model); Mike Johnson (publicity man); Douglas Merton
Synopsis
Peter and Wendy are partners in a daredevil flying act. Peter wants to marry model Justine but he doesn’t have the money to support her in the lavish lifestyle she prefers. Wendy helps Peter complete his invention, a new parachute. To attract investors, Wendy agrees to marry Peter in mid-air as a publicity stunt. Justine dumps Peter for someone who already has a million dollars, but Peter is happy because he and Wendy are in love.
Reprints

Genre
romance
Characters
Kitty Ryan; Nick Tossela; Rex Jordan; Mrs. Jordan
Synopsis
Kitty gets a job in a nightclub run by Nick, a childhood friend from their old, tough neighbourhood. They fall in love, but she wants “to marry money and social position.” Kitty dates upper-class Rex instead and they become engaged. Nick’s mother forces Kitty to have a conservative makeover so she’ll be a “lady,” but Kitty rejects this and decides to return to Nick.

Nick is referred to as "Tosseli" in one panel, but the rest of the time his name is given as "Tossela."

For a More Glamorous You (Table of Contents: 4)

Blinded By My Pride (Table of Contents: 5)

Genre
romance
Characters
Bruce McLean; Alice Hampden; Mrs. Hampden; Pete Hampden
Synopsis
Bruce and librarian Alice live in the same town, but their families have always been rivals. Alice’s widowed mother is now living in near poverty and Bruce offers to purchase Alice’s family home but she refuses to sell. When the old house catches fire, Bruce rescues Alice’s little brother. The destruction of the house removes the old rivalry and Bruce will wed Alice.
Reprints