According to the article in Alter Ego #117 (June 2013), it seems Richard Hughes, who didn't write or edit for this title, created the character of Super Mouse in the early 1940's as a parody/knockoff of Superman, evidently slightly in advance of Paul Terry's Mighty Mouse. In fact, it's speculated that it's because of the slightly-prior existence of the comic book Supermouse that Mighty Mouse, who was indeed called instead Super Mouse in a couple of his earliest animated cartoons, changed his name. 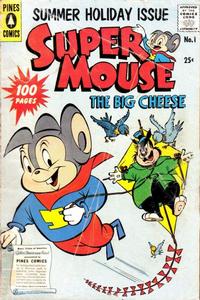 Monsters on the Loose (Table of Contents: 2)

Safe But Not Sane (Table of Contents: 3)

A Whale of a Story (Table of Contents: 5)

The Revolt of the Machines (Table of Contents: 9)

Job Number
A-485
First Line of Dialogue or Text
Look what I have, Happy...
Genre
anthropomorphic-funny animals
Reprints

The Noosepaper (Table of Contents: 15)

Ants in His Plants (Table of Contents: 17)

On the inside back cover.

Job Number
A-1967
First Line of Dialogue or Text
Gosh! What are you doin with that load, Buster?
Genre
anthropomorphic-funny animals

On the back cover.

On the back cover.