The Day I Promised to Marry (Table of Contents) 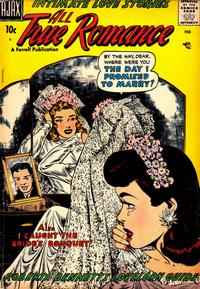 I Caught the Bride's Bouquet! (Table of Contents: 1)

Genre
romance
Characters
Sylvia Coombs; Laurie; Richard; Mr. Kent; Tom Gordon
Synopsis
Diner waitress Sylvia becomes a model. She meets medical student Tom and they fall in love, but she wants to marry a rich man, so they part. They are reunited at her friend Laurie’s wedding and Sylvia discovers Tom comes from a wealthy family. She decides to marry him after all.
Reprints

Genre
romance
Characters
Tom; Beth; Johnny Simmons
Synopsis
Soldier Tom is engaged to Beth but he’s shipped out and she is lonely. When Tom stands her up while home on leave, she dates old flame John. However, she changes her mind and goes home, where she meets Tom, whose train was late.
Reprints

pages are not concurrent

The Day I Promised to Marry! (Table of Contents: 4)

Genre
romance
Characters
Fred; Charlie Sutton; J. B.; Edythe; Mr. Wright
Synopsis
Edythe is preparing to announce her engagement to Fred when he suddenly and mysteriously departs. Charlie tries to cut in, but Edythe rejects him. Fred reappears and says he recognised Charlie as a convicted swindler who might ruin the business of Edythe’s father. Fred and Charlie fight; Charlie is arrested and Edythe is reunited with Fred.

How Can You Forgive Me? (Table of Contents: 5)

Genre
romance
Characters
Elsa Brown; Clint Carroll; Mother Murphy
Synopsis
Elsa becomes pen pals with Clint, but when she unexpectedly goes to see him, she discovers he’s the ugly wrestler they call “The Monster.” She hysterically rejects him. Later, she decides to write and apologise, but is interrupted by the arrival of Clint—who is now handsome. He suffered from a glandular disease and was wrestling to earn money for an operation. Elsa shows him the letter she had written begging for his forgiveness. They reconcile.
Reprints

This story features "Mildred Norton" (a drawing modelled on actress Joan Crawford), usually used in "advice columns" and comic stories. In this story, she appears in one panel as the narrator and identifies herself only as Elsa's sister. This story is probably a reprint and may have been slightly altered.