Indexed from a scan from http://digitalcomicmuseum.com/.
editing credits from this issue's statement of ownership

Men and the Laws! (Table of Contents) 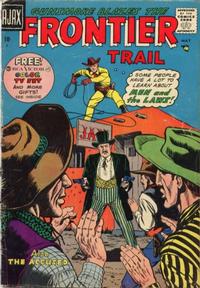 Men and the Laws (Table of Contents: 1)

Original title: "They're Holding Up the Stage!"

Appears at the bottom of the second page of the text story, between pages 3 & 4 of the previous sequence.

Actually a partially hand-written statement of ownership for The Rider!

The Accused! (Table of Contents: 6)