I Was Fickle! (Table of Contents)

Cover is a redrawn version of splash panel of interior story "I Was Fickle!" 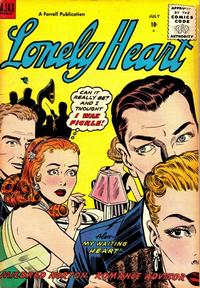 Genre
romance
Characters
Peggy; Neil Fox; Bill; George Turner
Synopsis
Although office worker Peggy is engaged to Bill, she dates Neil and Bill dumps her when he catches them. However, Neil marries someone else and Peggy learns Bill has a new “steady girl” now. Bill changes his mind and reconciles with Peggy.
Reprints

Genre
romance
Characters
Ted Jenkins; Mr. Jenkins; Betsy; Mary
Synopsis
Ted returns to his father’s ranch after three years away at school and no longer seems interested in the same things, including his hometown sweetheart Betsy. Betsy joins a rodeo tour. Home on vacation, she is reunited with Ted. They will both work on the rodeo for one more tour and be married as part of the show, then return to live on the ranch.
Reprints

My Waiting Heart! (Table of Contents: 4)

Genre
romance
Characters
Amy Powell; Brad Monty; Guy Rogers
Synopsis
Brad and Amy fall in love but Guy, the dock hand at Amy’s boathouse, sneers at the romance. He thinks Brad is using Amy for a summer romance. When Brad leaves on “business,” Amy agrees to date Guy. Brad returns: he had a brain tumor and needed an operation, and didn’t want Amy to worry. Guy punches Brad but he recovers and will marry Amy now.
Reprints

That Man Is Mine! (Table of Contents: 5)

Genre
romance
Characters
Phyllis; John King; Donna Blake
Synopsis
After dating for a “few weeks," John proposes marriage to Phyllis. Donna appears, claiming to be John’s wife, but he explains to Phyllis that he met her during the war and she vowed revenge when he rejected her romantic advances. Donna demands $5000 to stop harassing him; she also shows Phyllis a (forged) love letter John wrote her. Phyllis leaves, but when John and the police arrest Donna and her real husband for blackmail, Phyllis reads about it in the newspapers and returns to John’s arms.