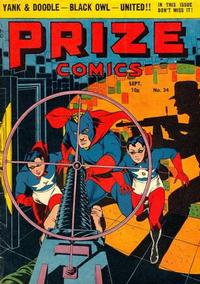 [Herman the Hermit] (Table of Contents: 3)

[The Return of Stopwach] (Table of Contents: 6)

Genre
superhero
Characters
The Green Lama [Jethro Dumont]; Stopwach (first appearance, death); Slim (villain)
Synopsis
The Lama must stop the crimes of Stopwach, a fellow student of Jethro Dumont at the Tibetan monastary, but who used his abilities for evil instead of good.
Reprints

This is the last Green Lama story in Prize Comics. His next appearance is in Green Lama #1 (Spark Publications). Art revision from Al Eadeh ? to Briefer, verified by Bill Black and added by Craig Delich 2010-5-22.

Mystery of Myrtle the Turtle (Table of Contents: 9)

Genre
superhero
Characters
Airmale [Professor Kenneth Stevens] (introduction, origin); Hilda (Steven's maid, introduction); Cliff Chandler (villain, introduction); Chandler's gang (villains, introduction for all)
Synopsis
Professor Stevens receives a turtle named Myrtle at his testimonial dinner, but finds out later from a hood that it was the wrong turtle and he wants it back.....at gunpoint. He changes to Airmail and takes on the crooks, discovering later that the underside of the turtle had concealed orders for a bank holdup.

Airmale got his amazing powers while mixing a formula in his lab and he broke a test tube, and the glass cut his hand allowing the mixture to ooze into the wound.