The scan of the cover has the illusion of being magazine-sized because the actual cover has the width of a standard U.S. comic, but is 1.5 inches shorter. 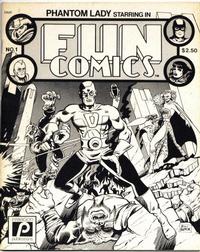 First Line of Dialogue or Text
Page! The Cat-Men are sacking the city!
Genre
superhero
Characters
Commando D [Page Connors]; Danny; Uncle Uriah; Tygra (villainess)
Synopsis
This presents the origin of the transformation of Page Connors, the war with the Cat-Men that destroyed his pre-historical Earth civilization, and his subsequent escape into a sacred book. Restored 50,000 years later in present times, he battles Tygra of the Cat-Men.

Other appearances of Tygra may refer to her as Tygraa, and to Commando D as Captain 3D. There are a few features for Cat-Men or Cat Men that pre-date this story and may have been inspirations for Bill Black's original content here.

When this story is reprinted, The Phantom Lady may be referred to as Nightveil.

Play of Death! (Table of Contents: 4)

First Line of Dialogue or Text
Eyes that burn a flaming challenge of death — icy fingers that point to murder…
Genre
fantasy-supernatural; western-frontier
Characters
Marshall Rex Fury [The Haunted Horseman (Ghost Rider)]; Sing-Song (laundryman); Slymes, (bank-teller); Banner (bank-teller); Old Simms (guard, death); Jack Allison;
Synopsis
Jack stumbles into a bank heist gone wrong and is blamed for the guard's death. It's up to Fury to flush out the truth with some trickery help from Sing-Song.

First Line of Dialogue or Text
Oh, no! Those long legged lovelies are off again!
Genre
superhero
Characters
The Atoman; Trixie (blonde); Dixie (brunette); Consuela (villainess)
Synopsis
A soap jingle writing contest wins the two women a holiday down Mexico way. However, Atoman's pals are duped into boating drugs back across the gulf to the U.S.