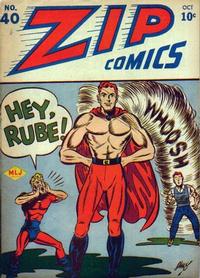 Land of the Amazons (Table of Contents: 1)

Originally credited Harry Sahle. The signed story by Robbins in #41 and 39 has identical artwork, but can be very difficult to separate from Vigoda, even when signed.

Genre
humor
Characters
Jake Strongarm (introduction); Sweeney; Slappy Applejack; Happy Applejack
Synopsis
Strongarm has a week to make a football team out of the Applejack boys and their friends.

Genre
humor; war
Characters
Uncle Ephraim
Synopsis
Uncle Ephraim has found a downed Nazi airplane and wants to keep it for himself.

Welcome To Hades (Table of Contents: 6)

Originally credited to Bob Montana, but the signature is Clem, and several of the faces have a clear Weisbecker look.