The Eye of the Serpent-God Set! (Table of Contents) 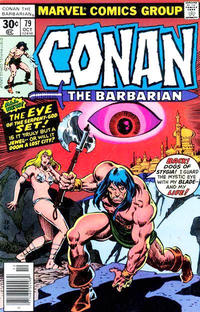 The Lost Valley of Iskander! (Table of Contents: 1)

Adapted from the short story by Robert E. Howard. As explained in the letters section, Ernie Chan both penciled and inked page 1 and 4, as the story was originally prepared as a 40 page tale for Savage Sword of Conan.

Letter from Dave Eastwood. Roy Thomas explains that due to John Buscema being deluged with assignments he took a story originally prepared for Savage Sword of Conan and, with some changes, used it as a three-part story in the color comic.