First Line of Dialogue or Text
Featuring: The Space Vampires

There is a distributor label on the cover: pdc
This stands for Publishers Distributing Corporation.

Story titles on the cover:
"The Space Vampires
"Tomorrow's Atomic Monsters
"The Green Horror
"Plus other outer space creature features" 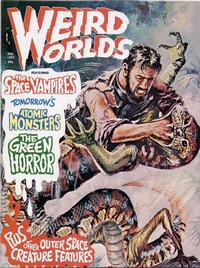 Contents list:
The Space Vampires
A horrifying tale of the space vampires' search for blood.

The Green Horror
They went beyond the stars only to find terror that could destroy everything.

The Creature
A time machine spins back to yesterday's primitive creatures.

Terror on A Station One
Station One, gateway between the stars and Earth, is threatened by the vicious Venusians.

The Corpse
The gruesome saga of a man who dug up a coffin and found the wrong corpse.

Deadly Fangs
The shocking tale of a man who came face-to-face with the worst horror of all - DEATH!

The Space Vampires (Table of Contents: 2)

Original title: "The Vampires of the Void."

The Atomic Monsters (Table of Contents: 3)

The cover title "Tomorrow's Atomic Monsters" differs from the title inside.

The Green Horror (Table of Contents: 4)

Genre
science fiction
Characters
Scott; Doc; Captain
Synopsis
The first interstellar expedition finds the remains of an advanced civilization on a distant planet. They also discover what wiped them out.
Reprints

The Creature (Table of Contents: 5)

Terror on Station One! (Table of Contents: 6)

The title of the story given on the contents page is incorrect.

The Corpse (Table of Contents: 7)

Genre
horror-suspense
Characters
Herman Duane, Don Duane; Les Duane; Luke Harris
Synopsis
To fulfill the terms of their uncle Herman's will, one of the Duane brothers has to die. Their scheme goes awry when murderer Luke Harris fits Les's coffin better than Les does, and vice-versa.
Reprints

Original title: "The Terror of the Lively Corpse."

Genre
horror-suspense
Synopsis
In a version of Ambrose Bierce's The Man and the Snake, a man is terrified by a deadly snake in his bedroom.
Reprints