The on-sale date is the publication date reported in the U. S. Copyright Office filing. It is also the date given in the letter column in Justice League of America #148. On-sale date of August 24 in Comic Reader #146.

Volume incorrectly listed as 3 when it should be 2. 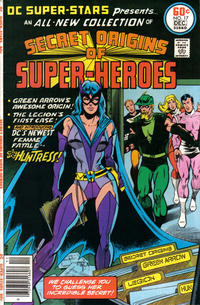 Origin recap occurring before the events of Oliver Queen losing his fortune to John DeLeon.

The Secret of the Quintile Crystal! (Table of Contents: 4)

Job Number
J-4871
Genre
superhero
Characters
Legion of Super-Heroes [Cosmic Boy; Saturn Girl; Lightning Lad] (origin retold); Superman (cameo); R. J. Brande; Lord Lorval (villain); Science Police
Synopsis
Cosmic Boy, Lightning Lad, and Saturn Girl relate to Superman one of their first cases as the Legion before he joined as Superboy involving the Quintile Crystal. After telling their tale, they meet up with the same Science Police officer who was involved alongside them in that case.
Reprints

Creation of this issue.

Staton's original sketch of the Huntress and rough and pencilled versions of the cover.

From Each Ending ...A Beginning! (Table of Contents: 7)