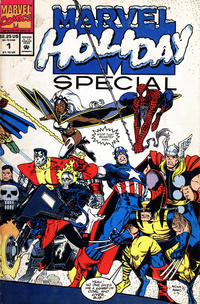 Credits and indicia.
Inside front cover.

A Miracle a Few Blocks Down from 34th Street (Table of Contents: 2)

A Christmas Coda (Table of Contents: 3)

First Line of Dialogue or Text
Silver bells, silver bells... and once again as it says in the old song, it's Christmas time in the city.
Genre
superhero
Characters
Fantastic Four [Mr. Fantastic; Invisible Woman; Human Torch; Thing]; Franklin Richards; Alicia Masters; Jacob Marley
Synopsis
Franklin learns the true meaning of Christmas in figuring out how to free Jacob Marley from the curse of being a holiday ghost.
Reprints

First Line of Dialogue or Text
Church bells. It's midnight. No stars in the sky. The wind is an icy knife.
Genre
superhero; crime
Characters
Punisher
Synopsis
Punisher redistributes some drug dealer cash to the homeless for Christmas.
Reprints

First Line of Dialogue or Text
Countless are the colorful legends of the Norse gods! While many are the thrilling epics of heroic courage and noble combat, some are only simple fables!
Genre
superhero; fantasy-supernatural
Characters
Thor; Odin; Sia; Sigurd; Harrak; Vizier; Grylak (villain)
Synopsis
Thor battles a nasty troll bent on Asgard's destruction. Odin answers a prayer and plays Santa.
Reprints

Ghosts of Christmas Comics Past (Table of Contents: 9)

First Line of Dialogue or Text
Many years ago, there was a terrible war in which brave men fought -- and sometimes died -- to defend the world from the madmen called Nazis.
Genre
superhero
Characters
Bucky Barnes (flashback); Captain America [Steve Rogers]
Synopsis
Captain America spends the holidays with Bucky's sister.
Reprints

A holiday song book with familiar words turned into an X-Men theme.

A Spider-Man Carol (Table of Contents: 17)

Story contains the brother of "The Kid Who Collected Spider-Man" from The Amazing Spider-Man (Marvel, 1963 series) #248.

[Happy Holidays from Everyone at Marvel] (Table of Contents: 18)