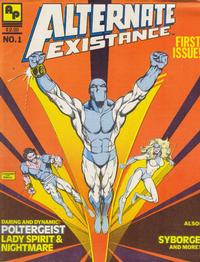 First Line of Dialogue or Text
Welcome to the first issue of Alternate Existance.
Synopsis
Jim runs down the contents of this issue and discusses plans for the next issue. There are also the editor's plugs for other "third-party" publisher books as well, such as Charlton Bullseye, PC (publisher), Justice Machine (Paragon), and Thunder Agent.

Typeset signature "Jim Chadwick" is followed by "Jim" in pen.

First Line of Dialogue or Text
So far... so good.
Genre
science fiction; superhero
Characters
Paylomanian spy; Mr. Tyson (the Krell's navigator); Lady Spirit [Sherry Simpson]; Poltergeist [Jeremy Simpson]; Nightmare [Carlton "Butch" Simpson]
Synopsis
The Kontorians and Paylomians are advanced aliens at war. A Paylomian spy steals new weapon prototypes but is killed in the escape in a crash landing on Earth in the process. The three grown siblings who aspire to be crime-fighters adopt the weapons and super-identities.

Reference to the spy's race range from Paylomanian to Paylomian, with the latter more common. There is a copy of the novel "Dune" and a Time magazine on the table on page 11. There are five bracelets in the case, but only three are required to power the team.

Genre
superhero
Characters
Dr. William Kenston Barnes; Mary Barnes
Synopsis
The year is 1945 and Dr. Barnes' wife is terminally ill but agrees to have her husband try to cure her with a ray device. It fails and in guilt and shame, he deems it murder and exiles himself to the will of the justice system.

The door handle and glass pattern reverse after Barnes opens the front door on page five. The editorial in this issue indicates Barnes was planned to become a superhero. Robert Powell is not Bob Powell of New York.

Syborge I (Table of Contents: 6)

This is the same Barnes character from the second feature from this issue. Neither the hero nor his sister is named in this chapter.

First Line of Dialogue or Text
They call me Syborge.
Genre
science fiction; superhero
Characters
Syborge; the Director of the American Defense Directorate (A.D.D.); Agent Wayne Loring
Synopsis
Members of Syborge's original army fire patrol are all assassinated leaving just him. As he investigates, he is contracted and trained further by the American Defense Directorate (A.D.D.).

Robert Powell is not Bob Powell of New York.

The Black Cat (Table of Contents: 9)

Touted as the first original Black Cat story "in twenty years." The creator credits are just "A Chadwick-Henley production."

Back cover. Color is limited to yellows and blue (and black). Robert Powell is not Bob Powell of New York.