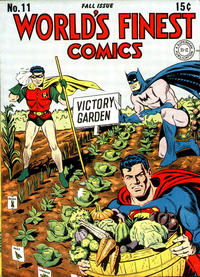 The City of Hate! (Table of Contents: 2)

Writer identification by Bob Hughes and verified by Craig Delich. Credits in Archives are wrong.

The Little Land That Wasn't There! (Table of Contents: 4)

Are You Pre-Flight Material? (Table of Contents: 7) (Expand) /

Coupons of Cutthroats! (Table of Contents: 8)

Kirby pencils and Simon inker or co-inker per Nick Caputo. Craig Delich credited Simon on pencils and Kirby on inks.

Lamp of Justice (Table of Contents: 13)

The Criminal Who Reversed the Crime! (Table of Contents: 14)

Oddity: Callender invents a hand generator, which produces a light-absorbing ray that obscures an area in total blackness, much like Dr. Mid-Nite's blackout bomb. Greater Gotham City existed in 2043.