The on-sale date is the publication date reported in U. S. Copyright Office filings. Comic Reader #148 gives an on-sale date of September 6. 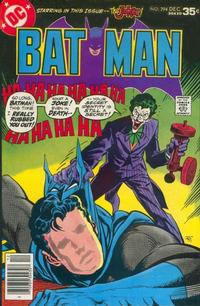 [Where Were You on the Night Batman Was Killed?] The Testimony of the Joker! (Table of Contents: 2)

Letters of comment from D. B. Webb, Mike White and Charles D. Brown.