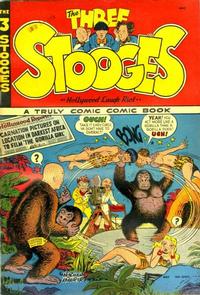 First Line of Dialogue or Text
White bwanas come into hut, just in time for breakfast!
Genre
humor
Characters
The Three Stooges [Moe Howard; Larry Fine; Curly Howard]; Marlena Marlena
Synopsis
A motion picture is being made in Africa. Curly is to wear a gorilla costume, with Moe and Larry playing caveman types. A real gorilla shows up and is mistaken for Curly.

This is an adaptation of the Three Stooges 1938 short film "Three Missing Links".

The Treasure of the Islands! (Table of Contents: 3)

Genre
adventure
Characters
Mark Montage; Sandy Woods; B. K. Karat; Percy; Tino; Garth
Synopsis
Mark goes to a Pacific island to help his friend Tino locate the treasure his people sank to hide from the Japanese during the war. Garth thinks Mark intends to keep the treasure for himself and tries to kill him, but when they find the treasure guarded by a giant squid Mark and Garth join forces to slay the creature and retrieve the treasure. Mark has yet another tale to sell as a film script.
Keywords
giant squid; Hollywood